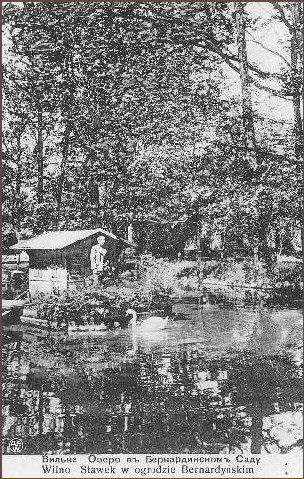 Gardens of former Bernardine Monastery and former Olizar Palace. In as early as the 15th c. the Bernardine (fratres fransiscanes observantes) Monastery had a garden located Northwest of it. This was one of the oldest monastery gardens in Lithuania. And in the 16-17th c. a garden was set up by the adjacent palace which was later called Olizar palace. In the 1st half of the 18th c. both gardens were fenced in by brick walls and paid out in regular straight lines. At the time this must have been the best managed complex of green spaces in Vilnius. It was comprised of four smaller gardens, a few horticultural gardens with a hop-garden, herb gardens, shade lime and maple tree alleys for cutting. In the beginning of the 19th c. the Bernardine Monastery garden retained the regular layout whereas the adjacent Olizar garden was paid out pictorially. When in mid 19th c. a new street was built right through the garden territory (today’s Maironio street), the garden was practically destroyed. The small garden in front of the Lithuanian Arts Academy today is the remains of this garden.

Former Sapiega Palace Park in Antakalnis was beautiful not just because it was well maintained and landscaped, but also because of its beautiful surroundings. From the Southeast it was surrounded by hills covered with pinewoods, and in the Northwest the picturesque view of banks of River Neris opened up. The park was set up at the end of the 17th c. between Pilies and Antakalnio streets. This is though to have been a Lithuanian shrine with an oak grove. In the early 18th c. it was of a prolong quadrangle shape with the layout characteristic of the baroque age. The lengthwise alley leading to the palace was construed as the compositional axis of the park. The park was fenced in by a brick wall and had unique gate of a rich baroque style, a part of which survived to this day. This was the heyday of the park. At the end of the 18th c. the park was expanded Southwest. In the 2nd quarter of the 19th c. the park was even further expanded in the same direction and approached the of Latheran Canons’ Monastery garden. The layout of the old part of the park did not see major changes, whereas the new part of the park was re-landscaped pictorially. In mid 19th c. a military hospital with numerous hospital buildings was set up in the park. The structure of the park changed significantly with only the backbone and the oldest lime tree in Vilnius, 19th c. poplars, birch trees and maples surviving to this day.