The early 19th c. saw attempts to expand public open spaces in the historical city centre. The Castle Hill with its surroundings – Botanical and Bernardine Gardens, Veršynas (Calf-tender) or Pilies Square, Cathedral Square, and the square in front of today’s National Museum - was to become their nucleus. All of this had already been provided for in the first development 1817 and 1837 city plans. Later 1875 and 1938 official city plans attempted to develop this idea even in a more coherent manner. However, Bekesh, Trijų Kryžių (Three Crosses) and Gediminas’ Grave Hills and the territory of today’s. Kalnų (Hill) Park were only included into this complex of Vilnius Castles Territory as late as the 60s of the 20th c.

Castle Hill and its Surrounding.

The Castle Hill had remained unlandscaped until as late as the 18th c. In the 2nd half of the 18th c. today’s Arsenalo street, leading from the Lower palace to Antakalnis by the stream of Vingrė, was landscaped. A boulevard planted with pyramid poplars was built here and eventually became favourite citizens’ promenading place. After 1830-1831 the boulevard was replaced by trenches of the citadel in the Lower Castle territory. The slopes of the Castle Hill were planted in the 20s of the 19th c. As early as the end of the last century the hill was rather well landscaped. Its curvy paths were planted with trees, with arbours sitting along them. This was the most beautiful and cosy corner of the city. The 30s of the 19th c., with partial restoration of the Gedimino Tower and conservation of the castle ruins, a lawn was built in the yard of the Higher Castle. 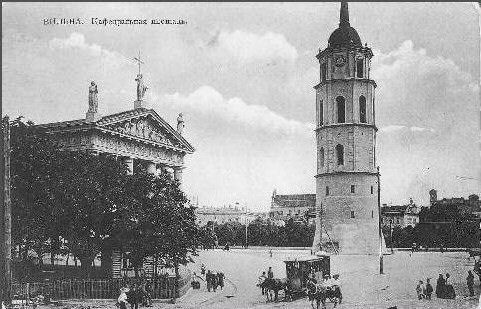