The early 19th c. saw attempts to expand public open spaces in the historical city centre. The Castle Hill with its surroundings – Botanical and Bernardine Gardens, Veršynas (Calf-tender) or Pilies Square, Cathedral Square, and the square in front of today’s National Museum - was to become their nucleus. All of this had already been provided for in the first development 1817 and 1837 city plans. Later 1875 and 1938 official city plans attempted to develop this idea even in a more coherent manner. However, Bekesh, Trijų Kryžių (Three Crosses) and Gediminas’ Grave Hills and the territory of today’s. Kalnų (Hill) Park were only included into this complex of Vilnius Castles Territory as late as the 60s of the 20th c.

A schema or tree can be ordered if you have collected all the data.

If you do not have it, you can order genealogical research beforehand.

Let us briefly overview historical development of the major Vilnius historical green spaces and their complexes starting from the very oldest ones.
Today’s Presidency Park (former Bishops’ Palace ) is one of the oldest with uninterrupted history. It is associated with the first written mention of this green space in 1387. ”A garden that is located at Goštauto street – A garden by a hillside southwards and a road circling around Vilnius towards the river in the West”. Part of Goštautų gardens territory is today covered with the Presidency Park. The Bishops’ gardens were also mentioned in 1543 letter of Bishop P.Alšėniškis (Holszanski), where he was writing about setting up a chapel in the garden by the Bishop’s Palace. The surviving inventory of 1753 shows that at the time this was an incredibly beautiful "Italian" style park in documents traditionally called the garden. It was developed following the example of Northern Italian parks, and covered a much larger area than it does now. The main park massif was situated in the territory of today’s Daukanto street. The garden of irregular shape was laid out geometrically with straight radial paths, round square and regularly shaped lawns characteristic of the baroque age. The centrepiece of the garden was a large quadrangle pond. In the 18th. C. this was on the most beautiful and interesting Vilnius parks. After the palace was transformed into the residence of Vilnius Governor General the former “Italian” or baroque park was redeveloped according to the design of the Principality architect J.Pusje and expanded westwards and the behind the palace. It was given the structure of the “English” park that came into fashion then. The green space was divided by wall into two independent parts from the composition point of view. The garden layout became more pictorial with new curved alleys and irregularly shaped lawns. The garden was expanded in the Southwest direction and moved from the old part in front of the palace that was now converted into a square. The square had a fountain with an oval pool. In 1898 the former was replaced by a monument of an ex-Governor General of Vilnius M.Murawjow, the suppresser of the 1863 revolt, and the square was named after him (the monument hated by Vilnius citizens was torn down after the 1st World War). After the 1st World War the square was named after Napoleon. Until 1987 the palace park had a 100 trees including maple, oak and chestnut trees much like by Lithuanians since old times. 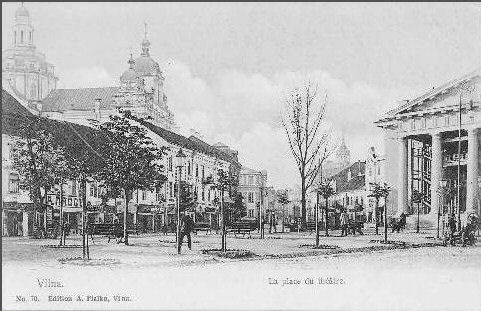 ”Vilnius is a miracle of creation of nature and human hands, a harmonious combination of nature and civilisation that marvellously retained the balance of these two beginnings, which was the result of a wise understanding that nature for the human being is both a home and a shrine. The beauty of Vilnius was first shaped by rivers Neris and Vilnele and the woods, and only then by a nature-loving human being."

Nature conditioned the process of merging the city and the hills, rivers, river valleys and abundant vegetation that surrounded it in the early stages of the city development. Today we hold this close connection with nature as an important criterion of urban quality. The search for balance between elements of the city and nature began when the city had already been set up. In the 18th century this search in the shape of theoretical speculations had more to do with Vilnius Old Town, its buffer zone and partly Vilnius central area and separate residences. It was only since the beginning of the 19th century that the idea of development of natural inserts – vegetation system – included areas beyond the developed city area at the time.